Stalag VIII-D was a German World War II prisoner-of-war camp (Stammlager) located at the outskirts of Teschen, (now Český Těšín, Czech Republic). It was built in March 1941 on the grounds of a former Czech barracks.[1] It was later known as Stalag VIII-B. 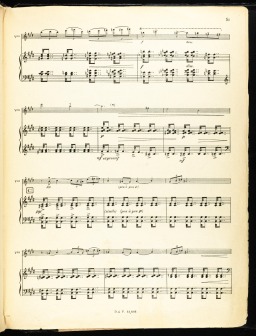 The first performance of Messiaen’s Quartet for the End of Time took place on 15 January 1941 in Stalag VIIIA, a prison camp at Görlitz in Silesia (now in Poland), in front of an audience of five thousand from all walks of life. “Never”, said Messiaen, “have I been listened to with such attention and understanding”. The young French composer had been captured as a medical auxiliary in May 1940 in the company of three other musicians as they were making their way on foot to Nancy, France. The title of the Quartet could suggest that it was written in response to his imprisonment, but he always resisted such an interpretation, saying only that the inspiration and source of the work was the imagery contained in the Book of the Revelation of St. John the Divine.

After his repatriation, Messiaen came into contact with the brilliant pianist Yvonne Loriod through his composition classes at the house of Guy Delapierre in Paris. The immediate result of this contact was a large work for two pianos, Visions de L’Amen, which was first performed by the composer and Loriod in Paris on 10 May 1943. One year later, Messiaen commenced working on his masterpiece for solo piano Vingt regards sur L’Enfant-Jésus, which he completed in September 1944. For piano writing, this formidable work, which the composer wrote with Loriod in mind, was a new departure, giving to its repertoire unprecedented challenges and treasures akin to the piano writing of Sergei Rakhmaninov, Franz Liszt and Aleksandr Nikolayevich Skryabin.

The source for the work comes from the composers’ study of the mystical writings of St John of the Cross and the New Testament Gospels. It is poignant to reflect that Olivier Messiaen was engrossed in the task of writing Vingt Regards at the very time when his contemporaries, Szymon Laks, Viktor Ullmann, Pavel Haas and Siegmund Schul were fighting for their lives in a concentration camp. His own experience of captivity during the Second World War cannot have been comparable to life in a concentration camp, but Messiaen must nevertheless have been profoundly aware of how fortunate he was to have been able to return to Paris and resume his life without threat of being arrested, only by accident of birth.

Quartet for the End of Time – autograph manuscript